Photography as a predatory act. This is an extended practice among all the photographers, to which, at a certain extent, all of us have succumbed at any time or at least felt the temptation to do so. I myself once witnessed a scene in which a “street photographer” was trying to photograph a beggar, indifferent to the energetic protests of the poor man.

Anything is allowed to get a unique and unrepeatable photograph; We no longer settle for a spectacular sunset or a unique street scene; The photographer is drawn to poverty, the decadent, the old and the broken, the discarded; the photographer turns his gaze to that which is ugly and unpleasant, and that the spectator will only dare to face it when presented in the form of a picture. No one wants to see a beggar in front of him.

Even the great masters of photography have succumbed at any time to the fascination for the marginal, see for example Paul Strand and his well-known photo of the blind woman, where he have not hesitated to use tricks and photographic artifices to obtain unconspiculy the photograph of the  subject  to avoid to be discovered.

In her essay on the Bowery, Martha Rosler reflects on the intentions of photographers pursuing this type of “photographic spectacle,” and connects the genre with the representation of liberal consciousness, which, according to the author, states through the argument of Charity their status and dominance. See also the relationship with Christian ethics.

Under these circumstances, it seems clear that in this predatory attitude there is no intention of reform, nor to improve the living conditions of the subjects who photographed. In reality, the power of protest and awareness of the photography and its influence as a driving force for a change in attitudes can be easily questioned in a world saturated with images. Our culture is eminently visual, and our voracity to consume images is inversely proportional to our ability to digest and interpret them.

An example it’s the enormous amount of photos that are published daily in social networks like Flickr or Instagram, where the intention of the authors I do not think that it is other than the accumulation of “likes” and flattering comments. Whom benefits from the photo of a beggar published on Flickr? Will not it provoke in other photographers the desire to get similar photos? 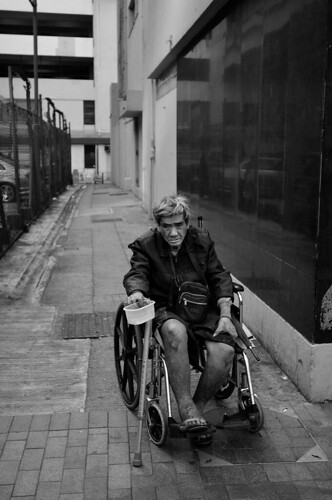 Becoming an INSIDER and photographing these marginal groups from “inside” is a technique often used by professional photographers, and I believe that in most cases honesty is beyond doubt. Certainly, the war reporters are a clear example of insider, because although relatively protected by their journalist accreditation, they are somehow an actor within the theatre of conflict, and they have a direct and privileged view of the events he photographs. In any case, the question again is whether the subject gets any benefit from being photographed.

We have well-known samples on how a picture of a marginalized subject reports produces few benefits to the subject, as for example the famous photograph of Dorothea Lange, “Migrant Mother”, or more recently “The Afghan Girl” by Steve McCurry. In the first case, we know that Florence Thompson did not receive any compensation proportional to the worldwide success of the picture and in fact, she lived most of her life in a situation of social exclusion.

The case of the Afghan girl seems even more painful, since she was subjected to the same photographic scrutiny for a second time, and we have recently been informed that she has been arrested illegally crossing the border of her country. Perhaps the benefit in this case has been to get diffusion of your case, simply because of the media morbidity that generates this type of coincidences. By the way, this woman name is Sharbat Gula.

The position of the insider obviously favors the photographer’s acceptance. The subject ceases to perceive his/her presence as a strange and unknown threat. From a psychological point of view, the photographer acts in this case as a “listener” to whom the subject can trust their concerns, fears and aspirations. It is possible that the photographer is perceived by the subject as the instrument that can give visibility to his marginal existence.

Alternatively, is it simply the naivety of the subjects that drags them to confidently deliver their images? After all, how can this person know the means by which their image will be distributed and spread around the world? From that deep stare of the Afghan girl, who seemed to be questioning each one of us, we have discovered over the years that she is barely able to see beyond the glass surface of the lens that is taking the picture of her portrait.